A very short walk from Brentwood Station. By car from the M25 drive to Brentwood High Street at the traffic lights turn right down Kings Road and the Baptist Church is about 1/2 a mile down on the right. There is a small car park on the venue, otherwise alternatives are street parking or Chatham Way Car Park a 5 min walk from the venue which is free after 7pm and located off Kings Road. The club is located downstairs, entrance at the side on Kings Chase.

Learn 'How To DGT' Here 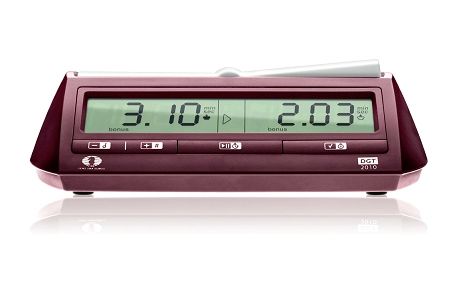 To turn on / off, press the button underneath (Turn Off when the game is finished).

Generally, clocks should be pre-programmed with the applicable time control.

If so, simply press the top bar, to start, as you would a normal clock. (N.B. A white king / black king will be shown in the display. Before the clock is started, pressing the white bar will switch these symbols over).

DISPLAY
The clock display will read as (hh:mm) unless the remaining time is 20 minutes, when (mm.ss) is shown.
The two clock faces will act independently to show  "HRS/MIN" or "MIN/SEC".

SETTINGS
For time controls employing a Quick-Play finish, the additional time for the QPF is added automatically.
However, this is done when one player has used all of the initial time period.
At that point, the additional time is added to both clocks. (N.B. this is not when the prescribed number of moves have been made, only when the primary time period has expired on one clock).

A static BLACK FLAG is displayed on the clock which first reaches the end of the first time period and is displayed for the next five minutes. This is equivalent to the flag fall on an analogue clock. It does not of itself indicate a loss on time, merely that the time has expired. The clock will instantly add the QPF additional time and carry on running. Therefore, at this point, the players should check that the requisite number of moves have been made, just as you would when using an analogue clock. If the player whose clock is showing the BLACK FLAG has NOT made the required number of moves when this happens, the opponent may claim the game for a LOSS ON TIME.

When the final time has expired for either side, a FLASHING BLACK FLAG is shown on that clock, which does indicate a loss on time.

The clock counts the move numbers, incrementing the counter after each move by Black, however, the program does NOT include the number of moves required for a given time control.

You can check the move number at any time by pressing the +/# key (second from the left below the main display) - see illustration 3 below. Be aware, however, that the counter is not infallible because a player may have forgotten to operate the clock, so the counter may be out of step. Best advice is to rely on the scoresheets at all times.

To illustrate the above points, here is an example of the process of adding QPF time:

1 - In the illustration to the right, both clocks are displaying minutes and seconds. Note the symbol between the minutes and the seconds is a full stop - compare with hours and minutes shown above which are separated by a colon. Click on the link to enlarge the picture and note that both clocks show the "min/sec" symbol. (This timer is paused for the photo; note the || symbol in the middle.)

In this example, the left clock face (White) is showing 11 seconds remaining (0.11), while Black has six minutes.

2 - Just 12 seconds later and it's all change! In the picture on the left, White's clock has reached the end of its primary time allotment and 30 minutes quick play finish time has been added to BOTH clocks. Note the black flag on the left to signify that this clock was first to expire the first time period allowance. At this point the players will check their scoresheets to see that the required number of moves have been made; if not, in this example, Black can claim a win on time.

But why do the clocks look so different from the above view? The answer is that, with the addition of the extra 30 minutes, the clocks have switched back to displaying hours and minutes (note the legend "hrs/min" on each clock). White's clock is therefore showing 29 minutes (seconds no longer displayed, so the actual time might be 29 minutes and between 0 and 59 seconds). Black's clock is showing 30 minutes plus the six minutes carried forward = 36 minutes.

3 - Finally, the clock does have a move counter, which is incremented after each move by Black (i.e. it doesn't count "half" moves). The move counter can be viewed at any time by pressing and holding the +/# button (see picture right). In this illustration, 22 moves have been made by both players and it is White's move (note the clock was paused at the time of taking this picture, but it is not necessary to pause the clock to show the move counter). If it were Black's move at this point, White will have made his/her 23rd move, but the counter will not increment to 23 until Black has also made 23 moves.

However, the clock's program does not record the number of moves required for the time control. This point is made to underline the fact that the BLACK FLAG only indicates the expiry of time.